CRC9 is an uncommon RF coaxial connector almost exclusively used in cellular devices such as mobile broadband modems to support connection of an external antenna. The connector passes frequencies up to 3 GHz.

The Male connector has a simple push-on interfacing and a 3.7 mm outer diameter. The connector is typically attached to the PCB by a Surface Mount or End-Launch mounting.

Occasionally the connector series is incorrectly written as CRC-9. 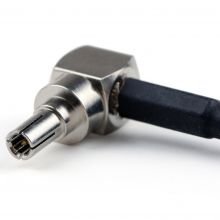