5G and Coronavirus: An Analysis

Many industry professionals refuse to acknowledge the concerns of the general public when it comes to 5G. One of the very few industry bodies to tackle the issue head-on has been the Australian Radiation Protection and Nuclear Safety Agency (ARPANSA). ARPANSA have invested considerable time in developing articles to address safety concerns as well as directly engaging the public on social media in a Q & A format. But something very concerning remains unaddressed.

With the world now in the grips of the COVID-19 coronavirus pandemic fresh fears have been circulating widely on the internet. Members of the public have drawn a causal link between the sudden switch-on of 5G and a sudden health crisis. Rather than dismiss these concerns as conspiracies it's important that the industry swallows its pride and attempts to address what lies at the root of these concerns.

The speed at which 5G was developed took most of us by surprise. It was expected that the very first launches of 5G would not take place until 2020-2021. It's quick development and implementation has lead many to worry about just how thorough the technology has been tested.

The 5G New Radio (NR) standard is developed by an organisation called 3GPP - Third Generation Partnership Project, which as the name might suggest was formed in the late 1990s to develop the 3G UMTS mobile standard. Since then the project has gone on to develop 4G LTE and now 5G NR. The 3GPP consortium comprises a number of independent bodies from right across the world, who are listed below.

Counter to some misinformation floating around the internet, 5G was not developed by Israel. Its standardisation has been a collaborative process involving both public and private sectors from right across the world.

3GPP periodically publish technical standards, called Releases, which comprise the academic work conducted by its members over time. Each 3GPP Release contains development instructions that are followed by equipment manufacturers to design and build 5G equipment. 3GPP does not itself design or manufacture equipment.

Each 3GPP release is open to the public, anyone can access and learn in comprehensive detail how the 5G NR system works. The latest 5G NR standard (3GPP Release 15) can be accessed here and downloaded here.

How does 5G work?

Without a moderate understanding of telecommunications engineering it is unlikely that readers will be able to confidently interpret the Release 15 documents.

5G at its very basics is a system used to facilitate mobile data services. It comprises a number of conventional IT networks used to route data within and between countries, along with a Radio Access Network (RAN) used to allow data to be transmitted wirelessly. Just about every concern held about 5G tends to be associated with the Radio Access Network so this is where we will focus our explanation.

5G's Radio Access is near-identical to that of its predecessor 4G LTE. Both 4G and 5G use a series of base stations mounted on tall towers or buildings which establish a wireless link between a mobile phone and the internet.

This wireless link is formed between a receiving antenna and transmitting antenna. When sending information to the internet from your phone, digital information (think: 0's and 1's) is encoded into a series of electrical pulses and sent down a circuit connected to an antenna. The antenna is a piece of copper which has been physically cut into a shape which resonates at a particular frequency on the electromagnetic spectrum.

The electromagnetic spectrum, for those who don't know, is the range of all possible frequencies of electromagnetic waves. At one end of the spectrum are the waves with the lowest frequencies. At the other end are the highest frequency waves. The spectrum is broken up into regions that define each of the different wave types. At the lowest frequencies, we have radio waves. Then, as we increase frequency, we encounter the microwaves, infrared radiation, and visible light waves.

The electromagnetic spectrum is always in use. If we are to measure any particular frequency range using a spectrum analyser we will always measure a small power level. Most of this however is naturally occurring background radiation, which are electromagnetic waves generated during early stages of the creation of the universe. In telecommunications this background radiation is called the noise floor.

Both the 5G tower and your device have antennas tuned to the same frequency. The antenna is connected to a device called an RF front end which has the job of converting digital information to an analog waveform, and adding a small amount of power so that the equipment at the opposite end of the wireless link can detect the signal over the background noise floor.

This is the same general mechanism that underpins all wireless communication. We have witnessed a significant convergence of all wireless technologies in recent years which has lead to just about every technology, whether it is WiFi, mobile, military, or microwave, all adopt a near-identical approach.

The 5G RAN can be seen as nothing more than an iterative improvement to 4G. It is however classed as a separate 'generation' as it has been redeveloped from the ground up, allowing future developments to extend its performance significantly further.

Most 5G deployments around the world use the 3500 MHz (3.5 GHz) frequency band. This band has been chosen because it is one of few pieces of valuable spectrum that has been underused. Previously 3.5 GHz has been used for many, many years to provide business-grade internet connections. Most of us have been surrounded by 3.5 GHz transmissions for at least a decade.

Because there's only enough bandwidth available on the 3.5 GHz band to provide about 1.6 Gb/s (and about 3.3 Gb/s when used alongside 4G), additional frequencies are required in order to provide the super fast internet speeds promised.

In Australia that frequency band is the 26 GHz mmWave band. Most countries have selected bands between 25 and 29 GHz due to the large quantities of unused spectrum. These frequencies have also been surrounding us for many, many years. In Australia's case much of the 28 GHz range is in use for satellite ground station communications and point-to-point microwave for high speed data links.

Both these frequency bands sit higher in the electromagnetic spectrum than those of 3G and 4G, which in Australia occupy the 700 to 2700 MHz frequency range. Higher frequencies lose their intensity much quicker than the lower wavelengths, as such 5G travels much shorter distances and is easily stopped by even small amounts of trees. Generally 5G does not penetrate indoors.

mmWave 5G cannot tolerate any obstruction and is considered unsuitable for widespread deployment. Instead it is likely mmWave systems will be limited to CBD areas, inside shopping centres, essentially areas with open space and high foot traffic. 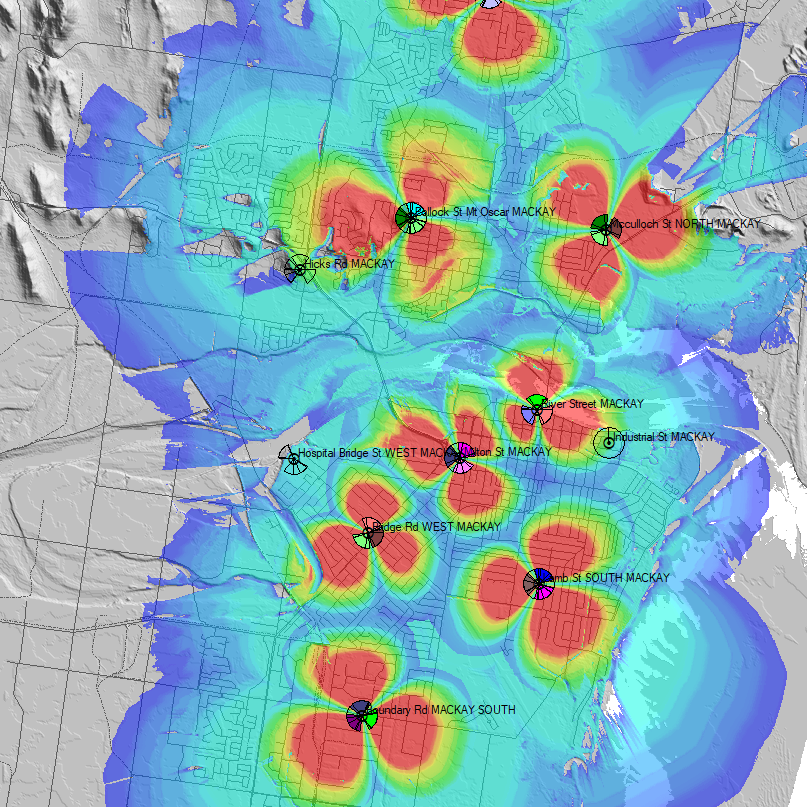 What appears to be most concerning to the public is the significantly greater number of base stations required in order to overcome the short range of 5G. When industry talks of a usable range of a few hundred metres, members of the public understandably worry a 5G base station will be installed on every street corner, a fear backed up by hundreds of official industry documents discussing the economic possibility of such a deployment.

There is a credible perception of danger associated with implementing mmWave base stations in extreme close proximity of suburban dwellings. The public's concern should be acknowledged as rational.

A number of theories surrounding COVID-19 have stemmed from the US military's experimentation with crowd-dispersal weapons. Directed energy weapons use an extremely high powered frequency in the mmWave band (95 GHz) to generate an uncomfortable heating (approximately +0.8°C) of skin. mmWaves are used in these systems because lower frequencies, such as those used in ordinary 3G and 4G networks, would penetrate through the skin and heat the body internally, causing significant internal damage.

It should be no stretch of the imagination that someone unfamiliar with 5G technology would suspect a link between the implementation of 5G and an unprecedented heath crisis.

Like 2G, 3G, and 4G before it, 5G poses a safety risk to those who conduct maintenance on the base station. Care must be taken to ensure all transmitters are powered down before breaching exclusion zones. These exclusion zones are typically up to three metres away from base station antennas.

Within three metres of a 5G transmitter the RF technician may be subjected to unsafe levels of non-ionising radiation. In extremely close proximity a 5G transmitter can also cause a rise in temperature in the human body. RF technicians accidentally exposed at very close range can develop cataracts and skin burns. Because non-ionising radiation does not have enough energy to interact with the body at a molecular level, the medical consensus is that other health effects such as cancers are not plausible.

Compared to older 2G and 3G systems, 5G is considered substantially safer as the technology is far more energy efficient. Older systems transmitted continuously and in all directions simultaneously at high power levels. Advancements in digital processing and antenna techniques allow 5G base stations to transmit at much lower power levels. Beamforming arrays allow signal power to be conserved to only a small geographic area, and deactivating when the user is no longer transmitting data.

With our current understanding of biology 5G is considered significantly safer than previous technologies.

A loss of trust

Bodies such as ARPANSA have tirelessly worked to educate the public on the science underpinning 5G. For the most part they have been sadly ignored.

While many are quick to dismiss the public as conspiracy theorists, dismissal ignores what lies at the absolute core of the issue; a loss of trust.

The past two decades have involved governments conclusively lying to the public. For many, the 2003 Invasion of Iraq was the point at which the facade of legitimate governance was forever shattered. Documents such as the Chilcot Report revealed a high-ranking conspiracy to illegally invade a nation under false pretense, leading to the deaths of nearly one million Iraqi citizens.

As the years progressed, several more governments were destabilised to further geostrategic objectives, leading to the deaths in the hundreds of thousands. Clandestine programs such as Timber Sycamore saw billions in taxpayer funds provided to extremist groups in Syria. Leaked documents showed allied countries trafficking arms to the Islamic State.

Mainstream news channels provided blanket coverage of conflicts where a financial or political interest was staked, while totally ignoring 14 million people facing starvation in Yemen - a conflict that the UN called the largest humanitarian crisis in modern history.

The decades saw the aggressive prosecution of whistleblowers, police raids on journalists, systematic corruption in banking, corruption in pharmaceuticals, bail-outs, bail-ins, Panama Papers, Luxembourg Leaks, Luanda Leaks, the list simply goes on and on. The public bore witness as no CEO or politician faced jail, while journalists were assassinated in car bombs.

The fact is the general public can no longer trust neither government nor corporations to do the right thing. And they absolutely shouldn't.

Where do we go from here?

Regrettably this leaves the telecommunications industry, along with many other industries in a tough spot. It is imperative that we take the community's concerns seriously and treat members of the public as rational actors. Only after building a mutual understanding will any educational program be effective.

Our society faces a crisis of trust. A second global crisis, one arguably just as challenging to solve.