In this article we're going to take a very brief look at the technology behind the three Australian mobile network operators.

However, rather than talk about each network's theoretical capabilities which you can find on their respective pages in our database, we're going to have a look at a small section of their networks as they stand deployed in October 2019. We've analysed theoretical network performance for a location in Clayton, Victoria for the Telstra, Optus, and Vodafone networks. The results, while anecdotal, provide some insight in benchmarking data rates of the three networks.

We'll be looking at data rate modelling. For urban / suburban environments coverage doesn't tend to be the issue, each network has a multitude of base stations in a relatively close proximity. What we are instead interested in is the impact of cell densification on signal quality and how that translates into peak data rates.

Telstra is heralded as Australia's fastest mobile network and rightly holds this claim. Telstra operates a 4G LTE-Advanced Pro and 5G NR EN-DC (Rel. 15) network. The company uses a complex stack of different frequencies aggregated together to produce theoretical peak data rates of about 2 Gb/s. This figure is an incredible feat and for a short while Telstra was the only network in the world capable of 2 Gb/s over its 4G network.

Assuming a compatible Cat-20 device, this figure comprises the following:

Telstra's network can actually provide even higher data rates when it adds its 5G NR layer. Telstra operates an n78 (3500 MHz) network with as much as 80 MHz in certain areas. Assuming an NR user device with 8x8 MIMO, a 5G layer capable of 3132 Mb/s can be added, providing an aggregate EN-DC data rate of 5089.5 Mb/s.

As we all know, in the world of technology theory and reality can be two totally different things. Providing such incredible data speeds relies on the availability of spectrum licences along with the financial investment to roll out the upgrades across such an enormous country.

Using publicly available data we conducted an analysis of the Telstra network in Clayton Victoria as it stood deployed in October 2019. In this area Telstra operates the following: 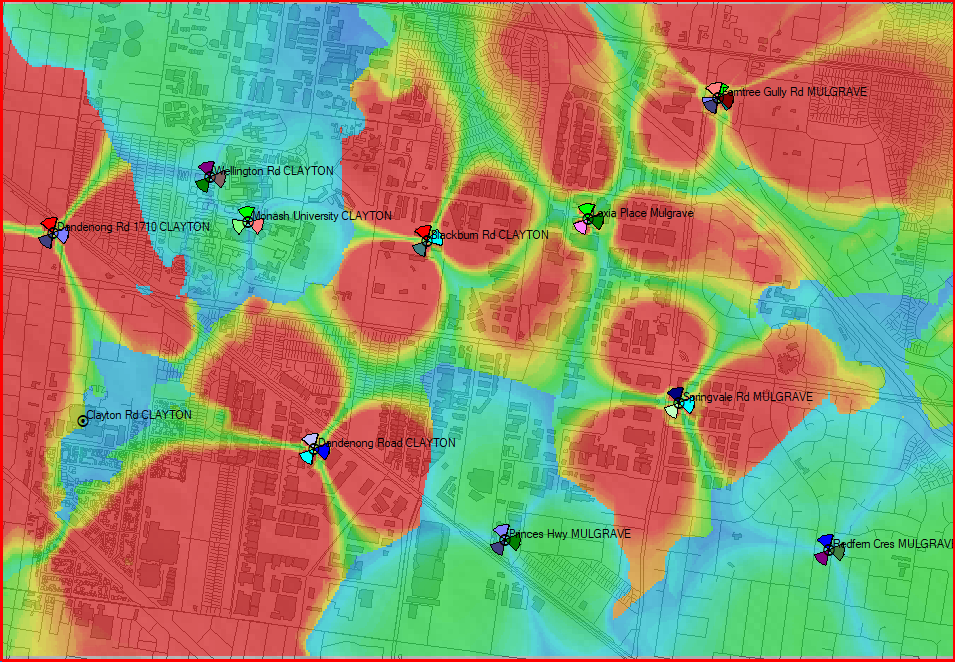 From the very beginning we observe that peak data rates cannot meet the 2 Gbps mark due to insufficient spectrum, and the fact that only 10 MHz of its old 3G network has been refarmed. The network appears to operate a CA_1A-3A-7C-28A carrier aggregation mode which provides a peak theoretical rate of 1475.9 Mb/s. This is still a very fast network.

We do note that Telstra hold three 20 MHz B7 channels, but it appears they are used for capacity as I don't seem to be able to locate any compatible 7D CA combinations that could be used to produce a higher data rate.

What we also observe is that multiple sites do not provide B7 carriers. It may be a case of network rollouts still being under way, or it may be a strategic technology decision. For example, no B7 at Monash University might be a case of a B7 DAS being implemented across their facilities. Unfortunately with publicly available data it's not possible to know the rationale behind the lack of B7 macro carriers.

There are also no Telstra 5G deployments in this area, which isn't exactly surprising given the early stage of rollout.

The network is then simulated to factor in the challenges associated with cell densification, particularly the impact on Signal to Interference+Noise Ratio (SINR). Network simulation tools also calculate all L1 overheads (e.g., cyclic prefix) which eat into the theoretical max rate.

The peak "real-world" data rate available on the Telstra network in Clayton Victoria was found to be 1206 Mb/s, with about 1145 Mb/s available at the application layer.

The mean data rate across the calculation area was found to be 662.3 Mb/s, with a 341.7 Mb/s standard deviation.

Optus has consistently maintained second position, sporting the second largest and second fastest network. Optus also operates a 4G LTE-Advanced Pro and 5G NR EN-DC (Rel. 15) network. Like Telstra, it has a wide mix of frequencies and spectrum allotments and claims data rates beyond the 1.2 Gb/s mark over its 4G network, with over 2 Gbps available on its 5G network.

Optus may be one step ahead of Telstra, with the company using AAS Massive MIMO (64T64R) to provide significant greater capacity on its 4G network.

Using a Cat-20 LTE device the Optus network is theoretically capable of the following:

However, we've been unable to confirm whether Optus' current RAN implementation can support 5C CA, which may mean a soft limit of 1566 Mb/s.

Optus have done exceptionally well in their LTE-A Pro rollouts, although like Telstra we also don't see any 5G active just yet.

Using publicly available data we conducted an analysis of the Optus network in Clayton Victoria as it stood deployed in October 2019. In this area Optus operated the following: 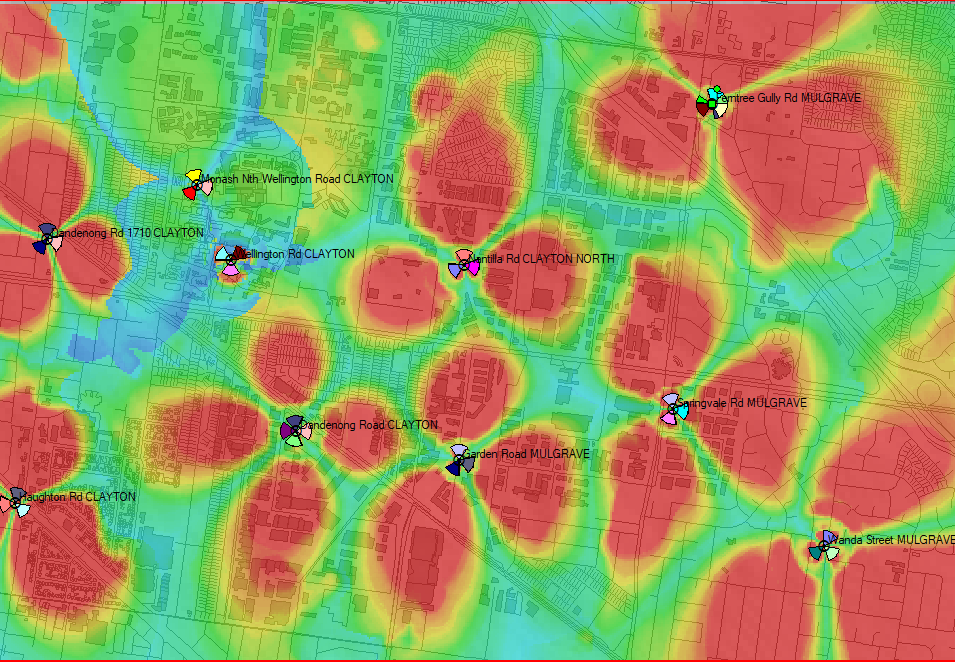 Optus have entirely refarmed their 2100 MHz 3G network on many of the cell sites, which compensates for the thinner 700 MHz spectrum licence. The network also appears to operate a CA_1A-3A-7C-28A carrier aggregation mode which provides a peak theoretical rate of 1573.8 Mb/s. In this area the network is actually faster than Telstra, due to the fact that the larger B1 band has a greater spectral efficiency than Optus' B28 band, courtesy of 4x4 MIMO.

Once again, it's not clear whether Optus can actually do 5C CA, so this figure may be capped at 1476 Mb/s.

The network has been simulated and factored in the placement and orientation of each base station antenna. Things mostly look good, except for a transmitter located on a tall highrise building at the university. As our simulation cannot factor in the impact of individual buildings the base station shows as an interference source and providing little benefit. Optus however know what they're doing and there is more than likely good reasoning behind its operation.

Monash University also lacks B7, adding weight to the idea that there is some sort of strategic decision making going on.

The peak "real-world" data rate available on the Optus network in Clayton Victoria was found to be 1279 Mb/s, with 1215 Mb/s available at the application layer.

The mean data rate across the calculation area was found to be 657.7 Mb/s, with a 272.0 Mb/s standard deviation. This is a fraction lower than Telstra and most likely due to favourable base station positioning. It's quite likely that repeating the analysis in another area would reveal different results.

Before we get started, it's worth noting that Vodafone are an exceptional team of people to work with. Were they to have access to the same portfolio of spectrum as their competitors I expect they would provide a world-class network. In 2018 Vodafone had attempted to merge operations with TPG which would have seen the addition of valuable 700 and 2600 MHz spectrum to their network, leveling the playing field.

Vodafone also operates a 4G LTE-Advanced Pro (Rel. 13) network. Like Telstra, it has a wide mix of frequencies and spectrum allotments and claims data rates beyond the 800 Mb/s mark over its 4G network.

Vodafone is also ahead of Telstra with the company using AAS Massive MIMO (64T64R) to provide greater capacity on its 4G network.

Using a Cat-20 LTE device the Vodafone network is theoretically capable of the following:

The Australian government took a second swipe at Vodafone when in early 2019 it decided to ban the mobile network operators from using Huawei in their 5G rollouts. Vodafone had constructed its 5G business model around the use of the far more cost effective Huawei 5G RAN solution. It seemed unlikely that the Australian government would disrupt its telecommunications industry simply to participate in the US-China trade war. Consequently, Vodafone is yet to implement its 5G network.

With the Vodafone-TPG merger scrapped by the ACCC, Vodafone has struggled with its lack of spectrum. Massive MIMO and AAS upgrades go some way to improving capacity (and peak data rates with future UE evolutions), but for the moment Vodafone is firmly in third place.

Using publicly available data we conducted an analysis of the Vodafone network in Clayton Victoria as it stood deployed in October 2019. In this area Vodafone operated the following:

Vodafone are yet to refarm their 2100 MHz 3G spectrum in this area, so unfortunately peak data rates are signficantly lower than its competitors. 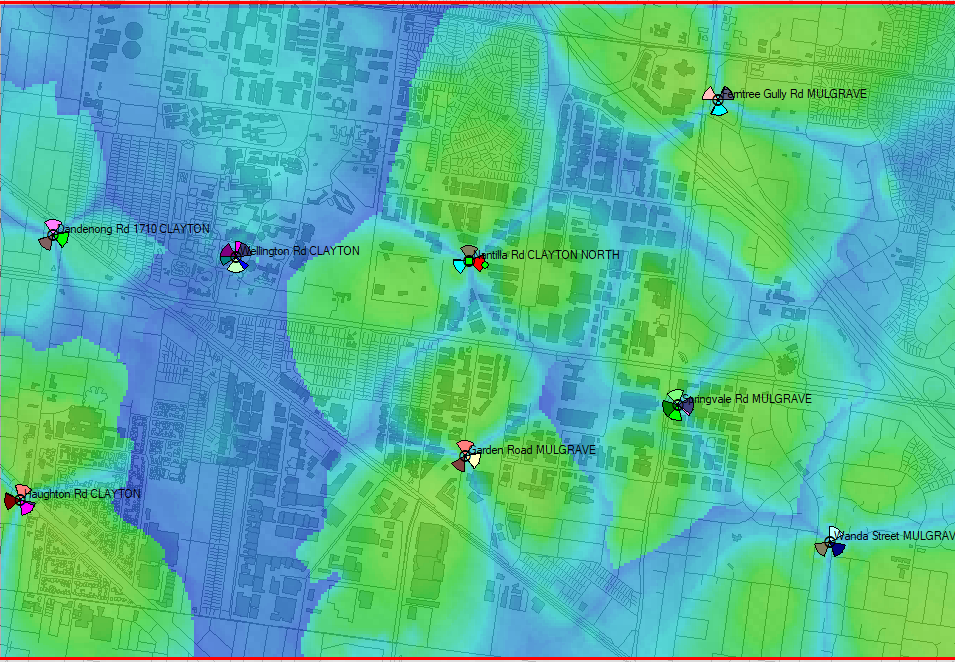 Due to the lack of spectrum Vodafone can only operate CA_3C-5A, and with its B5 carrier only supporting 2x2 MIMO the maximum theoretical data speed possible on the Vodafone network sits at 651.9 Mb/s in this area.

The network has once again been simulated and factored in the placement and orientation of each base station antenna. Vodafone have fewer towers in this area (8 compared to 10 each for Telstra and Optus), but what appears to be letting the network down is the lack of a second B3 carrier at Monash University. Again we're not sure what is happening here, it may be that the second B3 carrier has been used for a DAS. There's quite likely an explanation but we are simply working with limited information.

The peak "real-world" data rate available on the Vodafone network in Clayton Victoria was found to be 577.7 Mb/s, with 548.8 Mb/s available at the application layer.

The mean data rate across the calculation area was found to be 298.9 Mb/s, with a 146.2 Mb/s standard deviation. We would also expect that lacking B1, B7, and no AAS the area would experience worse congestion due to the limited capacity.

There's clearly significant caveats inherent to the limits of publicly available information, so it's important to take these results with a grain of salt.

Because we haven't seen any 5G implementations in this area, the below summary applies to each network's 4G LTE-A Pro networks only.