The QMA connector series was developed as a quick mating replacement for the standard SMA connector.

With identical internal construction, the connector exhibits the same RF performance characteristics and mechanical durability with the added benefit of a 360º rotating snap-on locking interface. While some manufacturers supply designs operating up to 18 GHz, like SMA the QMA connector exhibits best performance up to 6 GHz.

QMA connectors can be found anywhere traditional SMA connectors are used, but are most commonplace in cellular base station hardware, SCADA radios, and a range of wireless test equipment.

QMA connectors are also found in military hardware such as radar and satellite systems, where durability, strength, and quick-disconnection features are desired. 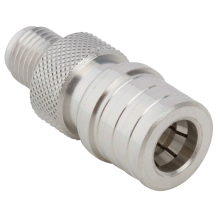