Reverse-polarity SMA (RP-SMA or RPSMA) is a variation of the SMA connector specification which reverses the gender of the interface.

This non-standard type SMA connector finds common application in WiFi and WLAN systems and is the most popular reverse polarity RF connector.

Like SMA, the series has a 1/4 - 36 UNS threaded coupling and can operate up to 18 GHz when using semi-flex or semi-rigid cable types. Most manufacturers however only support frequencies up between 3 and 6 GHz.

RP-SMA connectors are almost exclusively used in consumer WiFi equipment and hardware integrating two technologies such as Cellular or GNSS and WiFi to prevent incorrect attachment of antennas. 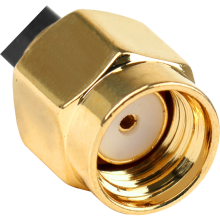