The following article serves to build an understanding about the antenna parameter known as Operating Frequency Range. An antennas frequency range is one of its most fundamental characteristics, which describes the range of frequencies that the antenna is capable of operating on with an acceptable level of efficiency. Defining a set range is also important so all other parameters can be reported consistently. For example, quite often an antenna is capable of operating outside the set range, but its gain, VSWR, and radiation patterns may be volatile or non-constant. The width of a frequency range is also referred to as bandwidth.

An antenna may have multiple ranges, particularly in the case of cellular antennas and combination designs. Modern wideband cellular antennas advertise (for the sake of simplicity) as operating 700 to 3800 MHz when in actual fact the datasheet will show three or four frequency ranges: 698 to 960 MHz, 1710 to 2170 MHz, 2300 to 2700 MHz, and 3300 to 3800 MHz. Designing an antenna to operate from 700 MHz all the way through to 3800 MHz is generally not possible, or at least not possible with high efficiency.

Antenna elements must be physically dimensioned to match a chosen wavelength often the centre frequency of the desired band. The wider the bandwidth means the less tuned the element, trading off a parameter such as VSWR / Return Loss, or Gain.

To resolve this design limitation, a wideband antenna will attach multiple highly tuned antenna elements to a combiner/multiplexer, achieving wide bandwidth without compromising other performance parameters. This type of design is common in panel, sectoral, and log periodic antenna types.

The operating bandwidth of the antenna is defined by a continuous range of frequencies designated by two limiting frequencies fstart and fstop.

When disclosing operating frequency range on test reports and datasheets, R-Spectrum follow the BASTA reporting recommendations. BASTA define the reporting of frequency range per the following (adapted) specification. As BASTA is limited in scope to base station antennas, specification definition has been broadened to cover all antenna types.

These parameters are then tested and the frequencies through which the antenna meets all performance targets can be accepted as the frequency range. Likewise if a datasheet has been provided during the testing process, the declared range can be validated accordingly.

The term Frequency Band is discouraged on datasheets as the term band is commonly used to refer to radio bands, such as: UHF Band, X-Band, Ku-Band, C-Band, and so on. 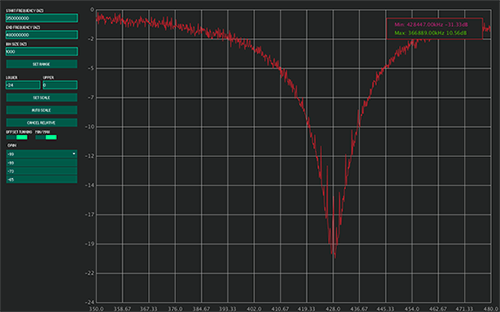