The following document serves to provide a general introduction to how data rates are estimated in LTE. This article can help readers understand how 4G data speeds are calculated at a theoretical level. For the sake of clarity we will simplify and deal with arguably one of the most common LTE configurations, per the following:

OFDMA then assigns each user the bandwidth needed for their transmission, using a scheduler such as Proportional Fair, Max C/I, Proportional Demand, etc. Unassigned subcarriers remain off, reducing power consumption and interference.

Adaptive Modulation and Coding (AMC) is employed to encode data onto the subcarrier, whereby a digital modulation and code rate scheme is chosen dynamically based on channel conditions reported by the User Equipment (UE). When channel conditions are poor, due to high interference or low signal strength, a simpler scheme will be chosen, conversely when the channel is clean a more complex encoding can be chosen.

There are two components to AMC: digital modulation, and code rate.

A digital modulation scheme is simply a manner of encoding a number of information bits (i.e., binary zero or one) in each time period called a symbol, by varying amplitude and phase of the subcarrier wave. The symbol forms the indivisible building block from which all our calculations are based. Constellation diagrams are used to represent the possible amplitude and phase variations, which have been shown below.

Coding refers to a forward error-correction methodology in which the data stream is padded with additional bits to permit error detection and correction. A short Cyclic Redundancy Check (CRC) value is appended to data within each transport block, comprising of a polynomial hash of the data, which is checked for a match against a CRC hash of the received data. A Turbo Coding scheme (namely, PCCC) is used to provide duplication of the data to allow any detected errors to be corrected by the UE. For example, a code rate of 1/3 results in one bit being sent as three bits i.e., two duplicate copies for each bit of information.

We've now learnt how to calculate how many bits per second per subcarrier, but OFDM allows us to stack a number of subcarriers in a given channel width, so we need to now define our elementary symbol in terms of width. One symbol per one subcarrier forms the smallest structure in LTE, called the Resource Element (RE). This resource element can be thought of as having two dimensions - width (one subcarrier, 15 KHz), and length (one symbol, 0.071428 ms). 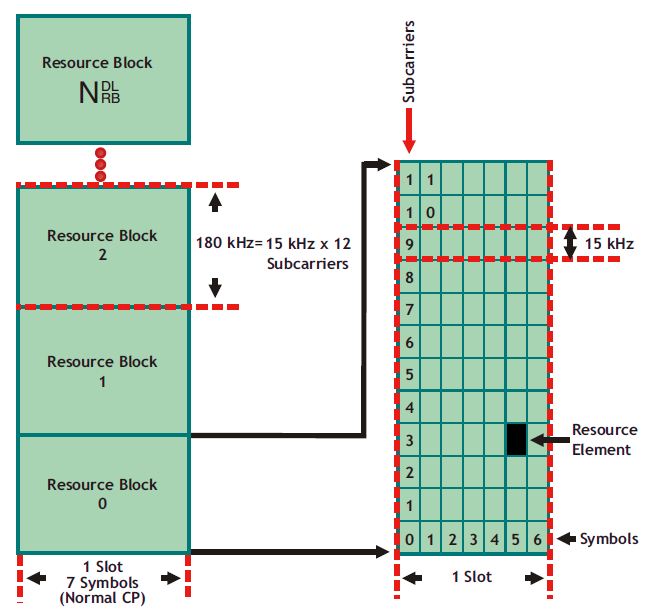 Defining these two structures now allows us to reconcile LTE channel bandwidth, which we've defined in the beginning as a 20 MHz channel. If resource block is 180 kHz wide, we can fit 111 RBs in our 20 MHz wide channel. Unfortunately 20 MHz is our total channel width, edge to edge, including guard bands. Accordingly our usable channel width is reduced to 18 MHz, allowing the transmission of 100 RBs.

While it would be convenient to jump straight in to calculating our total data rate, overheads generated by other physical channels and signals must be removed. In the beginning we've defined our physical channel overhead to be 1x PDCCH symbol per 1 ms subframe, which leaves 13 data bearing symbols out of 14. This leaves 130 symbols per radio frame, or 13,000 symbols per second. Factoring in our modulation and coding efficiency of 5.5547 bits per symbol, we get a data rate of 72,211 bits per second.

In practice the number of allocated PDCCH symbols depends on the quantity of traffic loading the cell. We also have additional overheads from other channels, for example Downlink RS contributes a 4.72% overhead, and all other control channels (PSS, SSS, PBCH, PCFICH, PHICH) aggregate to a further 2.6% overhead.

The use of two antennas in the downlink permits twice the number of subcarriers, one can think of 2x2 MIMO as doubling our useable spectrum provided the two spatial streams have low correlation - generally achieved by using orthogonal polarities. This increases our number of RBs from 1200 to 2400.

Unfortunately the story doesn't end there, while the network may be capable of providing a given data rate, it does not guarantee the device is technically capable of receiving such a rate. A device's LTE category imposes a hard limit on the number of transport block bits (TBB) receivable in the one subframe interval (TTI). We have defined in this example the use of a Category 4 device, which has a limit of 150,752 TBB/TTI.

This calculation is significantly easier, since in our case the limit is below what the network can provide. 150,752 bits / 1 ms subframe results in a hard limit of 150.752 Mb/s.