We are pleased to be working with Ericsson and Qualcomm Technologies on what is another example of how Telstra is innovating at the cutting edge of mobile technology. Success in 5G will depend on strong underlying 4G technology, and this world first call over Telstra's commercial network is an important step forward in the development of 5G.

We now have the commercial end-to-end network capability to deliver such world-leading LTE speeds and will now begin to deploy this technology in our mobile network to support even greater capacity and faster mobile speeds for our customers where it is needed most.

Gigabit LTE has enabled our operators to give a big boost to their customers, and 2Gbps LTE technology further improves 4G network capability, which is an essential enabler for early deployment of 5G. We are working with two consistent innovators, Telstra and Qualcomm Technologies, to deliver this world-leading capability in Australia and building greater alignment in the ecosystem for leading operators like Telstra, and device manufacturers to plan for these enhanced world-leading speeds.

The Snapdragon™ X24 LTE modem is the world's first announced 2 Gbps LTE modem and represents our latest LTE innovation in mobile technologies and is an important milestone in providing a glimpse of new experiences in the path to 5G," said Mike Finley, Senior Vice President and President, Qualcomm North America and Australia, Qualcomm Technologies, Inc. "We are excited to collaborate with mobile technology leaders such as Ericsson and Telstra to bring these mobile innovations to consumers around the world.

Telstra customers will be able to purchase 2Gbps LTE technology enabled devices in early 2019 and enjoy some of the world's fastest speeds in select 2 Gigabit-enabled areas of the network, to be deployed later in 2018. 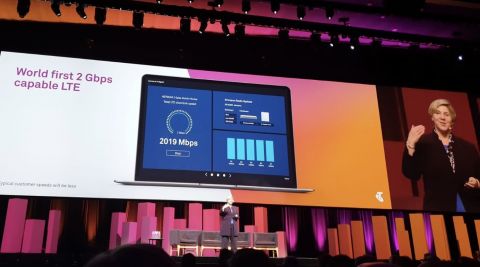