Telstra today announced Ericsson as its key 5G partner under an agreement that will see the two companies partner to deliver the next generation of mobile technology for Australia.

The agreement, signed by Telstra and Ericsson today, marks another important milestone in the nation’s 5G technology development and rollout.

Telstra CEO Andrew Penn said Telstra was already rolling out 5G technology in its network, with the technology switched on for the first time today in Adelaide, Perth and Canberra.

“Today’s signing marks a strategic partnership that has developed between Telstra and Ericsson over many years, and one that has resulted in nearly 40 world and Australian firsts,” Mr Penn said.

“Today’s announcement also coincides with the launch of our 50th 5G-enabled site in Australia. Ericsson has worked closely with us to ensure Canberra, Adelaide and Perth are among the first locations in Australia to be upgraded with 5G technology.”

Börje Ekholm, President and CEO, Ericsson who is visiting Australia this week, said: “Telstra and Ericsson have continued to demonstrate industry leadership through ongoing innovation and collaboration with best in class partners needed to build an end-to-end 5G ecosystem. Together we have put in place the fundamentals that will enable Telstra to succeed in 5G. Through our extensive collaborative efforts, we will ensure Australia is at the cutting edge of mobile technology.”

In February Telstra launched its 5G Innovation Centre on the Gold Coast supported by Ericsson. That Centre has since been home to several world and Australian firsts including the world’s first precinct of 5G-enabled WiFi hotspots, Australia’s first 5G Connected Car, and the world’s first end-to-end 5G non-standalone data call on a commercial mobile network.

In August, Telstra announced it had started switching on 5G technology, making Australia’s largest and fastest* mobile network the first in the country to be 5G ready.

Adelaide’s first mobile base station to be upgraded to 5G is located in Flinders St, with Perth’s first going live at Narrows Bridge in the Perth CBD. Canberra’s first 5G base station upgrade is at Pialligo, with other sites coming online tomorrow at Phillip, Lyons and two sites at Fyshwick. The base station upgrades in these three cities means that Telstra has now upgraded 50 base stations to 5G technology across the country. Other locations include Brisbane, Toowoomba and the Gold Coast.

Mr Penn said 5G was a key element of Telstra’s T22 strategy and the decision to appoint Ericsson as its 5G technology partner was a critical one.

“Telstra has a history of investing ahead of the technology curve to ensure we have the latest capabilities in place to serve our customers. We're proud to partner with Ericsson to pioneer 5G technology in this country and to ensure that together we continue to deliver market leading innovation in networks,” said Mr Penn.

Telstra’s rollout of 5G is underpinned by the around $5 billion in mobile network investment over the three years to 30 June 2019, consistent with previous guidance, to enhance the capacity, capability and reach of Telstra’s network. 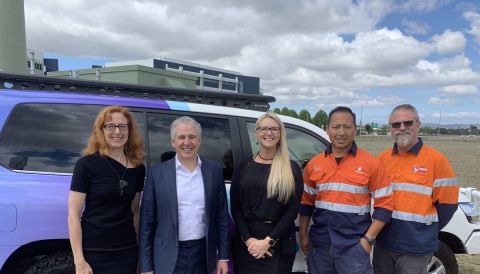