4x4 MIMO, sometimes referred to as 4T4R, uses four antennas to establish up to four streams of data with the receiving device. Compared to ordinary single antenna (SISO) networks, 4x4 offers up to a 400% increase in throughput.

With four spatial streams established the data payload is divided across all four antennas and transmitted over the same frequency band. Unlike 2x2 MIMO where it was feasible to simply use two polarisations, the use of four unique polarisations is rare. With reduced isolation and Envelope Correlation Coefficient (ECC), this has significant implications - most notably under clear channel conditions where the construction of physically independent propagation paths are not possible.

The use of older 2x2 MIMO equipment on 4x4 networks also has implications, where the transmission must operate in 4x2 mode to map data streams appropriately. Tests performed by China Telecom in 2017 demonstrated that in good signal areas 2x2 equipment slowed down when the network was upgraded to 4x4 MIMO.

4x4 MIMO equipment is however widely available with most smartphones and modems now compatible. Under strong signal conditions 4x4 provides around a 90% improvement over 2x2 MIMO, and under weak conditions as high as 160% faster than 2x2. 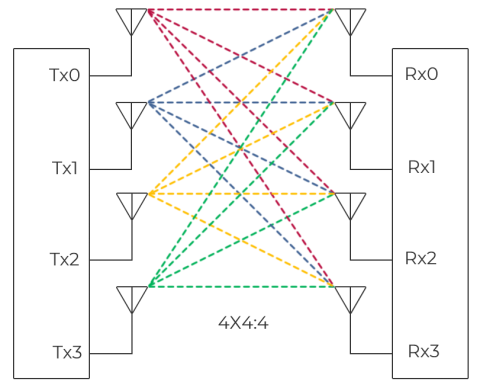 In comparison to older 2x2 antennas, design complexity increases dramatically. With most manufacturers unable to provide four distinct polarisations nominal MIMO configurations are most common. Individual antenna elements are instead subjected to intensive simulation to determine appropriate positioning within the radome that maximises spatial separation, ECC, and inter-port isolation.

It is also no longer practical build passive 4x4 MIMO external antennas, for applications such as cell edge connectivity, or fixed wireless access. Instead active elements are built into the 4x4 array, eliminating the need for additional cables and connectors. Active antenna technology is a key component to our Eigenlink broadband system. For more information on Eigenlink, or for help with building 4x4 MIMO systems contact our team.