8x8 MIMO, often referred to as 8T8R, uses eight antennas to establish up to eight streams of data with the receiving device. Compared to ordinary single antenna (SISO) networks 8x8 offers up to a theoretical 800% increase in throughput, although this is significantly lower in practice.

Field measurements conducted by Ericsson in 2012 demonstrated that 8x8 MIMO can effectively double throughput of 4x4 MIMO network provided the base station was well isolated from co-channel interference and the propagation environment provided rich scatter to support multipath. Despite their performance 8x8 MIMO networks are not commonplace due to a small ecosystem of 8x8 compatible UE. Mobile network operators have instead elected to leapfrog 8x8 and implement Massive MIMO which provides throughput gains for ordinary 2x2 and 4x4 MIMO devices, and significant gains for devices supporting TM9 and above. 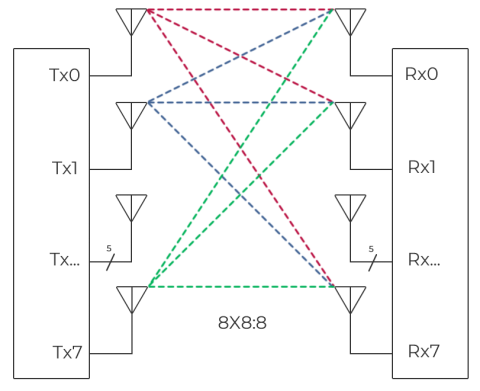